Marist College Ashgrove and Villanova College have set up the clash of the AIC First XV rugby union season after stretching their winning streaks into last weekend’s third round.

Ashgrove defeated St Laurence’s College 17-0 in a clash of two of the oldest rivals in Brisbane’s school sport while Villanova overcame Iona College 36-19 in their Heritage Round.

Ashgrove and Villanova share the competition lead and their fifth-round clash at Villanova Park shapes as the match of the season.

But both teams must first play their fourth round matches this Saturday when Ashgrove hosts St Edmund’s College while Villanova travels to St Peter’s Lutheran College.

Ashgrove goes into Saturday’s match with a perfect defensive record in 2019 after preventing St Laurence’s from scoring at Runcorn on Old Boys’ Day.

Tries to Ashgrove’s Hunter Dreghorn, Floyd Aubrey and Lachy Howse helped replicate the 17-0 scoreline from the schools’ second clash in 1945.

Ashgrove defended admirably against a strong Laurie’s forward pack that had scored 62 points against St Edmund’s College seven days earlier. And they made the most of mistakes from St Laurence’s with two long-range tries.

At Tingalpa, Villanova impressed their Old Boys with a 36-19 win against local opponents Iona.

A Gus Godwin try impressed the vocal crowd after the centre connected with young fullback Hamish Muir to score under the posts. Similar to their Round 2 win over Padua College, Villanova were able to establish a commanding first half lead, heading into the break 26-7.

At Tivoli, St Patrick’s College made the long drive from Shorncliffe worth it by posting a 52-0 win against St Edmund’s.

The Paddys’ Boys got their first win largely thanks to 17 points by Queensland Schoolboys flyhalf Connor O’Regan and two tries to Sam Bolton.

Finally, Padua was able to defeat St Peter’s Lutheran College at Elliott Road. A big performance by centre Malachi Hill was not enough for St Peter’s with the home team winning 57-7.

In Round 4 on Saturday, St Edmund’s will hope to put the first points on Ashgrove in 2019 at McMahon Oval.

St Pat’s will welcome Iona to Shorncliffe and aim to continue their winning ways after waiting a month to play at home following the split first round.

St Laurence’s will aim to keep their premiership hopes alive when they travel to Padua’s playing fields.

Meanwhile, Villanova will want to continue their winning ways against St Peter’s on the road ahead of the fifth-round clash with Ashgrove. 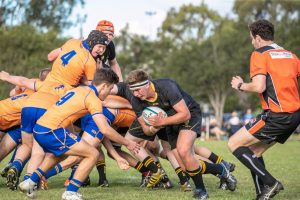